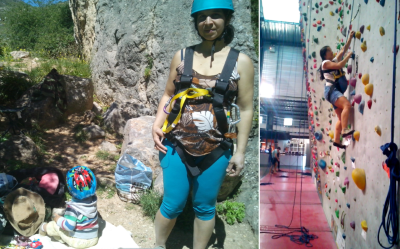 Born in Brazil, our project coordinator studied in France and Spain and worked for Total before joining BRGM, the French Geological Survey, in 2017

A chance friendship with a French family, just as she was finishing her first degree, proved life changing for PilotSTRATEGY’s Brazilian-born project coordinator Dr Fernanda M L Veloso, leading her to a high-level career in Europe.

An enthusiastic climber, Fernanda befriended the family at an indoor climbing centre in São Paulo. When the time came for the couple to return to France, they invited her to become their au pair to help with the children and speak to them in Portuguese.

“I didn’t hesitate for a moment – they were moving to Chamonix [in the French Alps], she says. “For a climber, it was a dream.”

A change of location was nothing new - Fernanda spent her childhood in many different corners of Brazil: “We travelled around a lot because of my father’s job as a mining exploration geologist,” she says.

Relocating to south-east France gave her the opportunity to study for a Master’s degree at Université Joseph Fourier (now part of Université Grenoble Alpes), a leading specialist science university. This in turn led to a job at Total – the Master’s had involved a work placement after which the French oil and gas company offered her a permanent position.

It was at Total - where she worked for nearly five years - that Fernanda first encountered CO2 storage: at the time the company had a carbon capture and storage (CCS) project which involved injecting CO2 into the subsurface, very close to where she was living. This experience showed her a way to change her career path and explore a promising, climate-friendly new field of research.

“I am a geologist and I love to work underground and to study the earth. But I realised it was difficult for me personally to keep working in the oil and gas industry,” she recalls.

Leaving a blue-chip organisation, where she had had positive experiences working in both France and Africa and had good career prospects, was difficult – especially a decade ago when there was less awareness of climate change.

“It was very hard to make the decision. People told me I was crazy to leave a company like Total,” she says. “But I found a way to convert and use my skills elsewhere.”

Funding from Brazil’s federal research council enabled Fernanda to further her interest in CO2 storage via a PhD at the Universidad de Zaragoza – in the Ebro Basin, one of the five promising regions PilotSTRATEGY is studying. There, she joined a team investigating how to store CO2 captured from a local thermal power plant, in the town of Andorra. Building on colleagues’ strong knowledge of the area, she worked on geological characterisation, using local rock outcrops as reservoir analogies.

Her involvement with BRGM, the French Geological Survey - where she has worked since 2017 - arose when, after completing her PhD, she was assembling a consortium for a project exploring CCS at sugar cane and sugar beet biofuel operations in Brazil and France. Rather than joining the bid, her contacts told her to send her CV to BRGM’s human resources department.

Since then, she has gone on to head the STRATEGY CCUS and PilotSTRATEGY projects, both of which BRGM is leading. Outside of work, she still enjoys climbing regularly – now with two young children of her own – from her base in Orléans, south of Paris, where BRGM is headquartered.

Other research interests include hydrogen – she is supervising a PhD student who is examining the feasibility of storing hydrogen using CO2 as a cushion gas. She also reviews scientific papers and has been asked by the European Commission this autumn to help evaluate Horizon Europe project proposals related to energy and geology.

Looking ahead, however, with growing recognition of CCS’s vital role in combatting global heating, she expects CO2 storage to remain her principal research focus.

“I really hope that CO2 storage will take off and that I will be very busy with it in the next years,” she says.

Picture caption: Being a parent has not stopped Dr Veloso pursuing her love of climbing. Pictured on the left with her son. Pictures supplied by Dr Veloso.