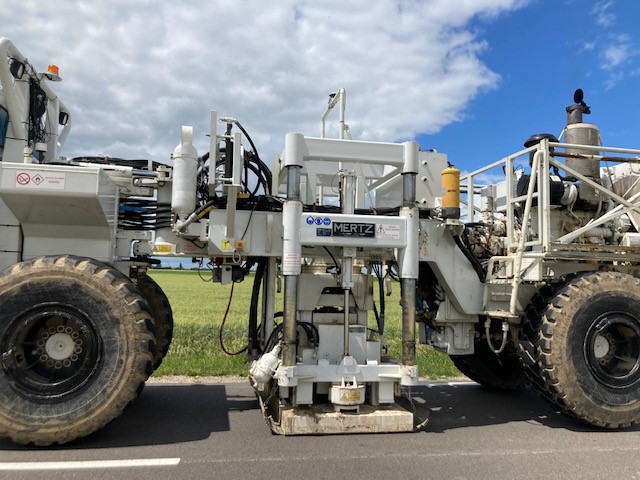 Safe storage of CO₂ deep in the earth requires an extensive knowledge of the subsurface, such as the geometry of the geological layers and their petrophysical properties. To learn about these properties from the surface, geophysical methods such as seismic reflection have been used for decades. Seismic reflection is a non-destructive technique, comparable to a large-scale ultrasound. We use a vibrator truck to emit vibrations that penetrate the earth. Each time the vibration, or wave, encounters a different geological layer, a portion of the energy continues downward, and one portion comes back up. The part that comes back up is recorded by a small instrument called a geophone, which acts like a seismometer. The vibrations of the trucks are less intense than those of a jackhammer and comparable to the effect of a passing rubbish collection truck.

Acquisition of 3D seismic data is regularly used to find oil and gas, but outside of this its use is not common, as acquiring data can be a costly exercise. A recent development in acquisition technologies allows us to acquire more data in a shorter time, using an independent and autonomous fleet of single vibrators. This unique technology, called SRS, is implemented by Smart Seismic Solutions (S³) and brings two main advantages

3D seismic acquisition with SRS technology was used in France for the first time in 2018, as part of geothermal exploration in the North-East of country, and had a proven impact on local reservoir imaging. Since then, the technology has been successfully deployed in France for new local energy exploration (such as helium) and is being considered by many new sectors

Until now, a 3D survey has never been acquired in France for a CO2 project, whether offshore or onshore, and certainly not for research. It is therefore a remarkable achievement for the PilotSTRATEGY project team to have secured European funds to entirely cover the cost of the 3D seismic acquisition campaign. The use of novel technologies like SRS acquired mainly on public roads, and a design with sparse receiver coverage, has helped reduce the overall cost.

The location of the study needs to answer ‘yes’ to two important questions.

Using the outputs of the European project STRATEGY CCUS and the geological knowledge of the project team, we chose an area around the small town of Grandpuits, to the south-east of Paris, to be the study area. A major CO2 producer is located there, and oil and gas exploration is taking place in the area, which is a good indicator that we have the right conditions to find a good reservoir.

The budget allocated to the campaign allowed acquiring data over an area of 100km2. Design, permitting, acquisition, quality control and pre-processing of the campaign were carried out by Smart Seismic Solutions (S³), third party partner of the project, from December 2021 to July 2022. The acquisition itself (layout of the receiver, vibration, collection of the receiver) took place over a period of only 5 weeks from mid-May until the end of June.

Despite difficulties accessing certain areas due to the refusal of some landowners and one town, the acquisition has been successful, and our activities were welcomed by most farmers and communities.

The large volume of data (10TB) is now being processed to transform the raw data into a 3D image of the subsurface. The geologists will then interpret this image to map the different structures of interest, like the top and base of the reservoir; identify faults; and verify the integrity of the sealing layers. We will also use an algorithm to try and recover the lateral and vertical variations of important reservoir properties like porosity or permeability. All these elements will feed into the rest of the project, allowing the building of a reservoir model; understanding the storage capacity and injection strategy; evaluating the integrity of the caprock; and finally proposing a concept for the development of the pilot.